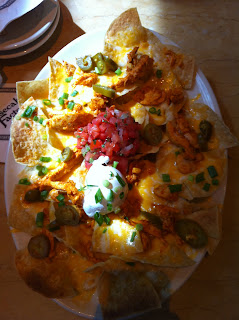 I have never been to the Cheesecake Factory before, but I decided that I should finally give it a try. I wasn't aware of their huge selection of food, thus the reason for never bothering to go. I gathered up the family and we headed into a giant place that looked very nice. We sat down at the booth and our waiter seemed like a good dude. Then our free bread came. It was a 6 inch long loaf of tiny bread.... yeah, weak sauce, but hey, it's free bread, what can ya do?
Appetizer time! I love me some good appetizers, a little snackin before the main event, couldn't wait to see what this place had in store so I went with the Factory Nachos. I love nachos, a giant plate of nachos were placed in front of me and they looked delicious. Sadly.... they tasted like something I would make at 2 in the morning in the middle of a PS3 game. Shredded cheese on top of chips with chicken does not equal nachos. We need liquid cheese goin on, some spices, something! The chicken had no taste to it even though it seemed to have some seasoning all over it. Pretty much the worst nachos I have ever had in my life. They are a step above bowling alley nachos.
But whatever, it was time to try out the main course, I went with a hamburger, wasn't in the mood for a big fancy meal since it was just 1pm. So I went with the Smokehouse BBQ Burger, which our waiter told me, was his favorite thing on the menu, yeah, right. You have to be an idiot to love that bland burger. There was no taste to it. Nothing. The BBQ was awful, it had no taste to it, the burger itself had no kick or seasonings or spices added to the meat it seemed. It was a very bland crappy burger. I could have had a better burger off the value menu in a drive thru.
I know most people don't go to The Cheesecake Factory, a place that specializes in cheesecakes, for some nachos and burgers. But holy crap it was awful food. I even reached over and got a spoonful of my sons mac and cheese and even THAT was horrible. Powdery tasting cheese on noodles, blagh! On top of all the blandness, this place is way overpriced for the quality of their food. If you're gonna charge that much for a burger, I better be able to taste it. And smile and say, money well spent!
I MIGHT give this place another chance, but I won't be rushing back any time soon at all.
Posted by admin at 9:11 PM

see...here's the problem. you just ordered wrong. Their Chicken Costaletta is one of the best things I've ever eaten, and their Cheesecake, is obviously the highlight. They typically have gigantic portions, for not a lot of money, and my wife and i generally split a dish, and then have to still gorge ourselves in order to get dessert as well. You can get a smokehouse bbq burger at any generic restaurant. Why not try something a little more rare, and tasty? I'm just sayin'

I had a good steak there once. Did you guys even try the cheesecake?

I actually had the cheesecake there, the reeses chocolate triple monster whatever it is. We thought about getting a piece each before we actually saw the thing. We split one, and it was great, but NOT recommended unless you're going home right after. The thing is heavy with a combo of reeses, cheesecake, chocolate cake, and caramel somewhere mixed in. Good stuff but it will most likely end the night for you.

We don't have a Cheesecake Factory here in Scotland, at least I don't think we do. However it sounded like your ordered two things you probably could (and should have) made at home. If you're going to go to somewhere expensive, at least try something that you normally wouldn't have. Nachos and Burgers are hardly going to tell you much about their food. Try their specials or you know, the thing they specialize in, cheesecake!

I went to TCF in Raleigh and ordered the nachos and I thought they were pretty tasty. We shared them between three of us before getting a slice of cheesecake apiece. They weren't stacked with alot of ingredients, but it is on the appetizers menu, so there ya go. The cheesecake was fucking amazing, although I don't remember which one I ordered.