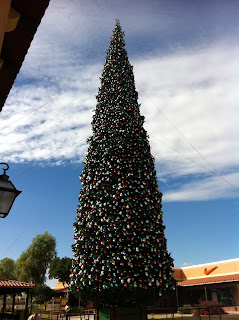 Anyways, after that we headed into the food court for a bite to eat and I see a place called Charley's Grilled Subs. Now I am a huge fan of the "sandwich". And I have had many toasted subs, but never a grilled one. 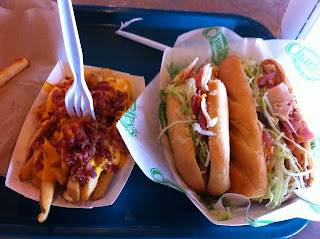 Charley's is a bit like Subway, or any other sandwich place, where you tell them what you want on the sub and they make it. Except at Charley's they put the meats and sometimes veggies on the grill along with the bread. So instead of it just being a bit toasted and warm, the entire sandwich itself is hot and grilled. Along with that, I also snagged their cheddar bacon fries. So how did it turn out?
Not bad. Not great. Nothing I will rush back for. It's a pretty basic sandwich, just hot. They don't have any special seasoning that they sprinkle on, or do anything extra to make the sandwich taste amazing. Now don't get me wrong, its good for what it is. But, it's just a warmed up sandwich.
The cheddar bacon fries? Well.... I will say this about Charley's. They don't skimp out on the toppings, they pile everything you want on there. Usually with cheddar bacon fries you get a squirt of the cheese and a pinch of bacon. These fries had tons of both, I was pleased.
All in all Charley's is a decent place to get a sub. But I wouldn't go back. Unless you got deep pockets. For just my 12 inch sub that really was just some ham, bacon turkey and lettuce, and a side thing of fries, the total came out to 15 bucks. That is a little more than I would spend for a sandwich like the ones they make.
Posted by admin at 10:48 PM