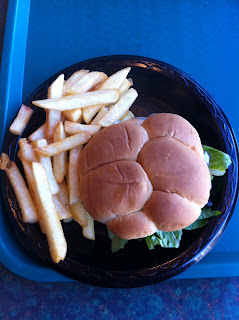 I recently moved to Anthem Arizona and have been hoppin over to the mall here for general shopping and a bite to eat in their food court. I was in the mood for a good burger and decided I would try the Pig-N-Whistle which had a BBQ Cheeseburger, my favorite type of burger.
Now besides the BBQ, two other things caught my eye, one being, they charbroil their burgers, which is exactly how I like em, and the other, is they use Aunt Hatties Potato Buns for their buns there, which to me is the best hamburger/hot dog bun brand out there.
When I got there I saw they had samples of their BBQ Pork up, which I grabbed and found their BBQ sauce to be very good, so I knew this burger had to be great. And it was. In fact, I am declaring the burgers at the Pig-N-Whistle the BEST burgers around. Yep. It's a done deal. Hands down best burger I have ever had. And it was in the food court of a mall!
As for the service there, it was very nice, after the meal I went back to the counter to get a wet nap and the lady that helped me asked how I liked the burger, told her it was the best I've had, and she gave me a high five. I've never been given a high five at a food place before.
So with hat, Pig-N-Whistle receives two big BBQ covered thumbs up, and I will for sure make a return visit in the near future to try out their BBQ Pork Sandwich.
Posted by admin at 8:59 PM