Sandwiches are my favorite food. Mainly because it's hard to mess up a good sandwich. But some places get it right, by using awesome bread, the right seasoning and fresh meat and veggies, while others, like Subway, us flakey crumbley awful bread and meats that taste strange. And for some strange reason when I get a fountain drink in Subway it tastes strange as well. I also like sandwiches because I enjoy fresh food. The greasy stuff is good but always leaves me feeling like death afterwards. So I try to stick to the fresher side of things.
Whenever a new sandwich shop opens up, I try to be in there asap, because they usually don't stick around very long. Case in point, there used to be a place called Dads Subs, which took over the same spot Quiznos once had. And Dads lasted about two weeks before closing down. That space in the shopping center has been empty for some time, until tonight when I noticed Jersey Mikes had opened up there. So after a long day of Christmas shopping, some fresh food was in order.
I went with the Club. All of my favorites in one sandwich. A simple signature sub that surprisingly some places just never get right. But at Jersey Mikes, you get your subs and you get them "Mikes Way". Which is lettuce, tomato, onion, and 'The Sauce". I won't tell you what "The Sauce" is, you have to experience it yourself. They also sprinkle on some seasoning, it says spice on their menu but my guess is some oregano.
So after all the build up, is it worth it? Yes. Mega huge fist pump from Jersey YES. Their bread is awesome, some type of seasoning or crazy magic is done to it, I saw something suspicious going on there. And it was delicious. The meats were all fresh, veggies were fresh, it tasted wonderful, and it also did a very nice job of filling me up. I actually have some left over, which is rare, I usually kill a sandwich in no time.
As for the service, it was top notch, very friendly and nice people working there who even slipped me a free sugar cookie for being a first time customer! They even made a sandwich that wasn't on their menu for me. My wife likes chicken with lettuce and ranch and I saw nothing even close to that on their menu, but they made it anyway. And was happy to see that unlike places like Quiznos, that appear to just have their chicken soaking in hot water to keep it warm. Mikes actually throws the chicken on the grill to cook and heat it up before it goes on your sandwich, giving your chicken that nice crisp fresh taste.
I will be back to Jersey Mikes in the near future. And hopefully unlike Dads, Mikes sticks around for a long time.
Find a Jersey Mikes near you!
Posted by admin at 8:40 PM 7 comments

Olive Garden has been an old school favorite of mine for years now, although until recently it's been a long time since I had the chance to visit.  Back in the old days I pretty much stuck with the chicken parmigiana, but I knew going in this time it was time to branch out and try something new.
Before the main course, I have of course have to mention the Olive Garden salad which has always been 5 star, and I also went with the appetizer sampler which I don't believe has changed much in the 15+ years I've gone to Olive Garden (and that's not a bad thing.)  The toasted ravioli and stuffed mushrooms were great as usual and a nice warm up.
A few months back I checked out an Olive Garden take out menu and the "Mixed Grill" caught my eye.  The Mixed Grill consists of 2 skewers, one with steak and the other with chicken, and I decided that was right up my alley.  The server brought the giant plate with 2 skewers, then removed the meat, peppers, onions etc. and onto my plate.  Great taste, tender meat, and served with a side of squash/zucchini and roasted potatoes.  This meal is definitely one that will fill you up, so if you go with it you may have to hold back on appetizers or you will end up with a take home box like I did (which isn't necessarily a bad thing.)
I would highly recommend this if you are looking for something that isn't the usual pasta with tomato or white sauce, or if you are just a fan of a great skewer.  This had great flavor and provided a plentiful amount of meat, with sides that compliment the meal nicely.
Posted by D. Mueller at 12:37 PM 3 comments

The Fast And The Furious Drinking Game 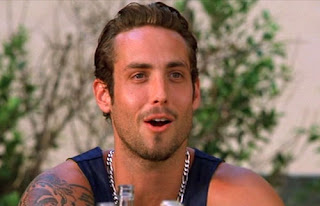 Yeah, us Hungry Jerks get a little thirsty, and sometimes we like to play games with our drinks while watching some bad ass stupid movies. So here is a game to play while watching one of the most legendary so bad its awesome movies in the world!
-Number 1 rule. You can have any beer you want while playing this game, as long as its a Corona. So please, to pay proper tribute to this insane movie, play this game with Coronas.
-When someone says "Dom" take a DRINK.
-When you someone shifts their car, take a DRINK.
-When someone hits the NOS, take a DRINK.
-When the camera goes into the engine of the car, take a SHOT.
-When Vince comes back to the BBQ, and Leon calls Vince "Old Coyotes R Us!" cheers, and then take a SHOT.
-When Vince smiles when telling Mia about "Cha Cha Cha" take a SHOT.
-Chug a DRINK during the Ferrari race!
-When Dom is hit by the semi truck at the end of the movie, begin to DRINK and continue drinking the entire time Dom is airborn.
That should get you good and hammered. Be back next week when I list the rules for a drinking game I actually played with some friends once. the SPEED drinking game.
Posted by admin at 1:26 AM 0 comments