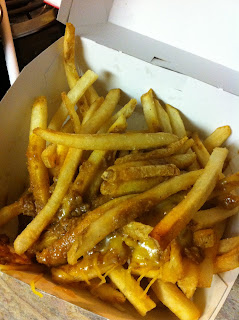 Now what the hell am I supposed to do with that? I got a giant handful of fries, and a splash of chili with a sprinkle of cheese slopped into it. Look at that! Would ya look at that?! Seriously. How do you screw up pouring chili on top of fries?
And now for the really weird part. A first time ever problem at a drive thru. Now we have all been given a messed up order, or a wacky looking crapfest like my chili cheese fries, but this just confused me to no end.... I take a bite out of my pathetic looking chili cheese fries, and take a drink of my........warm coke?! My coke, had NO ice in it. And my parents, and nephews drinks? NO ICE. Now, it's not that big of a deal, because we have ice, it's just weird. Why would you not put ice in someones drink order?
With the lack of ice, and the half attempt at putting chili on fries, I dub this Carls Jr. as the LAZIEST fast food place around. Sure Sonic and other places screw up an order here and there, but they at least try. Carls Jr. didn't even try. They failed.
Thanks for nothing Carls Jr.
Posted by admin at 11:57 PM

I feel ya. A month or so ago I got a totally squished (sideways) burger and a piece of a lid INSIDE my drink. I left a comment on carlsjr.com about it. Then I got an email the next day from someone in their corporate office, an email from the store manager, and a phone call from the store manager, apologizing for the service and offering to make it right. I never took them up on it, but it was nice that they stepped up.