I don't really like Taco Bell. But when you're hungry, and in a hurry, it's a good cheap alternative to McDonalds. And I was hungry today, and in a bit of a hurry, and the only choices were Taco Bell, or McDonalds. So yeah, Taco Bell it was.

I live in Phoenix AZ. The Taco Bell I went to is by my parents house, they love Taco Bell, and I do most of my editing and writing over at their place, so I was asked to get some Taco Bell for them on my way over. Now, this Taco Bell, screws up your order at the very least 9 times out of 10 times. Not joking. Now of course when I go I usually order for a large amount of people, but still, this is your job, it's what you are paid to do, so why not do it properly? Someone tells you what they want, put it in that bag. But today, I had even more problems on top of the usual missing item.

I ordered a large Mountain Dew, a taco party pack, and 2 chalupas. I arrive home and take a drink from my Mountain Dew, which had no syrup in it, just good ol carbonated water, mmm! Fail 1. I then go to grab my chalupas out of the bag, but only find one chalupa in there, the other, is gone. Fail 2. So, I eat, and grab a couple crunchy tacos from the box, I go to pour some mild sauce on it, and when opening the taco shell, I see this.... 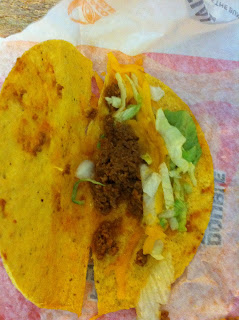 Really? A teaspoon of the fake meat? I mean REALLY? Anyways, I eat it, and then go to pour some sauce on the next taco and get THIS! 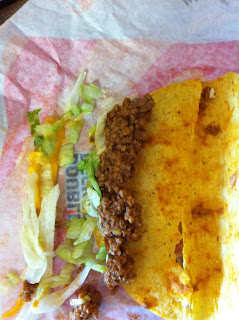 Seriously. I have made many tacos in my lifetime, they are not that hard. What type of people do they hire at Taco Bell that can't even properly put a taco together?

It is with this, that I am officially announcing my retirement from eating Taco Bell. Taco Bell, it's been nice, but it's time to move on to other places that don't hire complete idiots to work at their establishments.
Posted by admin at 3:30 PM 2 comments

I love me some good BBQ. Thankfully, living here in Arizona, there are many BBQ choices. One better than the other. But I think I have finally found a personal favorite. Q-To-U BBQ in Anthem Arizona. Great food, excellent service, and very reasonably priced. So here is what I got...

Started off with some pulled pork nachos. So many delicious toppings on top with the pulled pork. Some of the best nachos I have ever had. 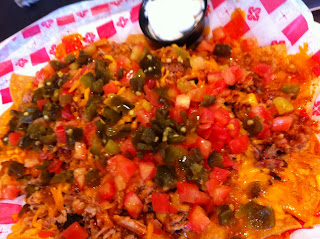 For my meal, I kept it kind of simple. The Pulled Pork Sandwich. There was so much stuff on their menu it was hard for me to choose exactly what to go with, so I went with this. With a little extra BBQ sauce on it of course. And it turned out to be the very best pulled pork sandwich I have ever had. The BBQ was the perfect mix of sweet and spicy. The meat perfectly cooked. I was in BBQ heaven. And the french fries. Wow. 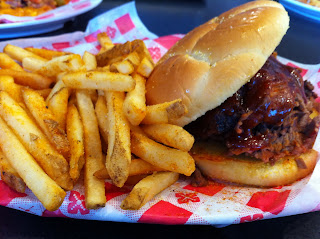 I plan on visiting this place again soon. And I plan on getting something I have never seen, or heard of before. The Hawg Dawg. It's a smoked sausage, stuffed with cheese, then wrapped in bacon and deep fried. Topped off with onions and their own sweet jalapenos. Yeah, amazing I know.

So if you love BBQ, and you live near or close enough to Anthem. You need to check this place out. Just walking in I was knocked over by the sweet smell of BBQ. Perfect.
Posted by admin at 5:24 PM 0 comments